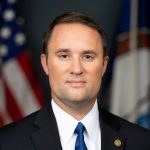 Virginia Attorney General Jason Miyares was in Roanoke this morning to promote the TRIAD program, a multi-agency effort designed to better protect and serve Virginia’s seniors. Later today Miyares will tour Straight Street Ministries on Luck Avenue; Straight Street has been working to combat human trafficking in the area – an issue Miyares has also focused on at the statewide level. Also appearing at the TRIAD event in Roanoke at Eureka Park were representatives from AARP, the Local Office on aging and other organizations that deal with a host of senior issues.