Matthew is scheduled for a bond hearing Thursday in Charlottesville General District Court. He is now being held without bond in the Albemarle-Charlottesville Regional Jail. 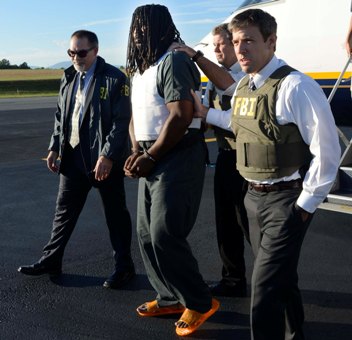 ALEXANDRIA, Va. (AP) — The man charged with abducting a missing University of Virginia student is back in Charlottesville after being arrested in Texas. Capt. Aaron Carver of the Albermarle-Charlottesville Regional Jail confirmed Friday evening that the suspect is in custody there. Authorities have charged 32-year-old Jesse Leroy Matthew Jr. with abduction with intent to defile Hannah Graham, an 18-year-old sophomore from northern Virginia who has been missing since Sept. 13. Matthew was arrested on a beach near Galveston, Texas, on Wednesday. He did not fight extradition to Virginia, where he could make an initial court appearance late next week. Police say they still have no idea about Graham’s whereabouts. They have said Matthew was the last person seen with her.

CHARLOTTESVILLE, Va. (AP) — Police in Virginia say they expect the suspect in the abduction of a missing 18-year-old college student to be returned from Texas over the weekend. Charlottesville Police Capt. Gary Pleasants says officers are in Galveston, Texas, Friday to return Jesse Leroy Matthew Jr. to either Richmond or Charlottesville by Saturday. Matthew was arrested on a beach in Texas on Wednesday on a charge of abduction with intent to defile. Charlottesville police say the 32-year-old Matthew is the last person to be seen with University of Virginia student Hannah Graham two weeks ago. She remains missing. Charlottesville officials say they don’t expect Matthew to make a court appearance before Thursday because of a judicial conference in the city.