A “colorful” pipeline protest in downtown Roanoke this morning 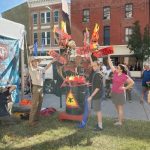 12th District delegate Chris Hurst was a principal speaker at a pipeline protest this morning outside the Wells Fargo tower – one of the financial institutions that has loaned money to the groups behind the Mountain Valley and Atlantic Coast Pipeline projects. Resistance is NOT futile despite the construction that’s well underway says Hurst. The “Climate Emergency – Tristate Pipeline Strike” also included “Art-tivists” who unveiled a mobile art structure called “Earth on Fire.”