Anthony Flaccavento: 2nd challenge to Griffith is much different 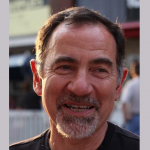 Democrat Anthony Flaccavento is trying for a second time to unseat Republican Morgan Griffith in the 9th Congressional District. He got less than 40% the first time around, but he says there is a lot that is different this time. For starters, he says, Griffith now has an eight-year record, and it is not a good one. Flaccavento has outraised Griffith in recent months and hopes the voting numbers will follow the same trend. WFIR’s Evan Jones has our campaign profile: