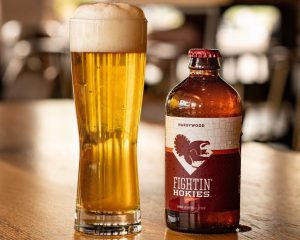 A Virginia Tech-branded craft beer is an international award winner, and in just its second year, also proving to be a sales success. Fightin’ Hokies Lager was the brainchild of three Virginia Tech Food Science Professors while visiting a beer garden in Germany. It went on the market just last year, and among its awards already: silver medal in its category at the Australian International Beer Awards, described as the largest competition of its kind in the world. Fightin’ Hokies Lager is brewed at the Hardywood Park Craft Brewery in Richmond, and it became quickly became Virginia’s best-selling new craft beer. Some of the profits go right back into the university’s brewing science program for things like scholarships and student travel for study programs in Munich. WFIR’s Evan Jones has more:

NEWS RELEASE: Over 60 judges at the 2022 Australian International Beer Awards got a taste of the Hokie Spirit this summer — and they were impressed.

This honor comes hot on the heels of news that the official beer of the Hokie Nation was also Virginia’s bestselling new craft beer in 2021, its first year on the market, according to Nielsen.

“Receiving this award is really exciting for our program and our partnership with Hardywood,” said Brian Wiersema, the pilot plant manager who oversees Virginia Tech’s on-campus brewery. “This competition focuses on style criteria, and it’s great to see that we were headed in the right direction, especially when you see the list of other international beers that medaled for this style.”

“We note that one of the gold medal brewers in this category has been brewing since 1040 A.D. — we gave them a head start,” said College of Agriculture and Life Sciences Professor Sean O’Keefe.

Fightin’ Hokies Lager, the first beer to come out of Virginia Tech’s partnership with Hardywood, is the culmination of nearly a decade of research, inspiration, and collaboration. What began as a conversation between Department of Food Science and Technology faculty members and eventual Fightin’ Hokies Lager co-creators Wiersema, O’Keefe, and Herbert Bruce about their fondness for the helles style after one of the department’s annual student brewing exchanges in Munich has turned into a fruitful partnership that has launched two original beers — the sales of which support food science scholarships, research, lab renovations, and the very brewing exchange on which Fightin’ Hokies Lager was first conceived.

“While Fightin’ Hokies Lager has broken sales records, what we find most special about Hardywood’s partnership with Virginia Tech is the opportunity to collaborate with food science faculty and leverage their decades of knowledge and experience to create a beer of exceptional quality, to which this prestigious award is certainly a testament,” Hardywood co-founder and CEO Eric McKay said.

Hardywood — Virginia’s largest craft brewer — is no stranger to such accolades, having earned major international awards for several of its beers, including Richmond Lager and Hardywood Pils.

All Hail to Thee, the team’s newest brew, is a limited edition dry-hopped amber ale that hit the market in May in celebration of Virginia Tech’s sesquicentennial. The hoppy, full-bodied ale is available for a limited time in select Krogers, Giants, Wegmans, Total Wines, and independent bottle shops across Virginia.

Hosted by the Royal Agricultural Society of Victoria, the Australian International Beer Awards was initially established as a national competition in 1987 and has since grown into the world’s largest yearly beer competition that assesses both draught and packaged beer and now receives over 2,500 entries from more than 420 breweries in 21 countries each year, according to the contest’s website. Brewers, beer journalists, retailers, and beer experts from across the globe are tapped as judges. All entries are blind tasted and awarded points based on appearance, aroma, flavor and body, technical quality, and style.