“Where are you Bobby Browning?” is shooting on location in Vinton 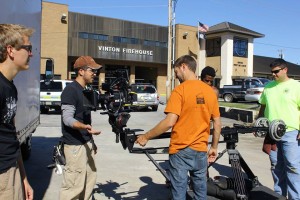 The producers of the small-budget independent film “Where are you Bobby Browning?” have started shooting on location in Vinton and at Roanoke College … meanwhile the writer and producer of “Kicked by Grace” – filmed locally last month – has good things to say about the area.  WFIR’s Gene Marrano has the story:

Click below to hear more from “Kicked by Grace” writer-producer Rick Garside on filmmaking in the Roanoke area: