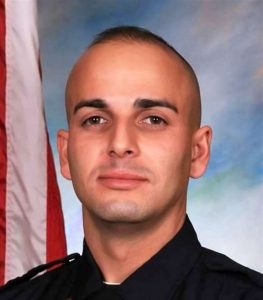 Press Release: The Town of Vinton is pleased to announce the appointment of Fabricio D. Drumond as its next Police Chief. His first day in the new role will be December 1, 2020. Drumond has served as the Interim Police Chief since July 21st, assuming the role after former Police Chief Thomas L. Foster left the town to become the United States Marshal for the Western District of Virginia.

Chief Drumond first joined the town in 2009 as an Officer and was promoted to Deputy Police Chief in 2016. Prior to joining the town, he worked for the Roanoke Police Department where he began his Law Enforcement career in 2006. He graduated in 2000 from Maynard High School in Maynard, Massachusetts and enlisted in the United States Marine Corps shortly thereafter and served until 2006. During his time in the United States Marines, Drumond was meritoriously promoted to Private First Class, Lance Corporal, and Corporal and the final rank of Sergeant. He has a multidisciplinary Bachelor’s Degree specializing in both Criminal Justice and Business cognitive and a Master’s Degree in National Security, both from Liberty University.

Drumond is grateful for his new role as Chief of Police, “It is a great honor and privilege to serve as the Chief of Police for Town of Vinton. Together, as a community we will continue to fortify the relationship with our residents and the people we serve. United, our destiny for success and safe community will be unshakable. I take great pride in having the privilege to serve amongst the men and women of the Vinton Police Department who have an unwavering passion towards the dedication of service to our wonderful community.”

During Drumond’s tenure with Vinton he has obtained several Law Enforcement specialties, such as Field Training Officer, General Instructor, TASER Instructor, and actively trained Law Enforcement recruits in both formal classroom instruction and officer survival applications. He has been the recipient of Drug recognition Awards, personal and unit citations, Leadership awards, and Officer of the Year and has attended several critical leadership and management courses, most notably by the 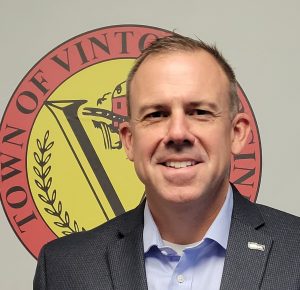 The Town of Vinton is pleased to announce the appointment of Richard W. “Pete” Peters, Jr. as its next Town Manager. His first day in the new role will be January 1, 2021. Peters has served as the Acting Town Manager since August 1, assuming the role shortly after former Town Manager, Barry Thompson, announced his retirement effective December 31, 2020. Peters has more than 20 years of experience in local government including the City of Roanoke and Botetourt County.

Peters first joined the town in 2015 as Assistant Town Manager/Director of Economic Development. He is a 1993 graduate of William Byrd High School. Peters has an undergraduate degree from Ferrum College in Recreation and Leisure Services and a Graduate Certificate in Local Government Management from Virginia Tech, a program co-sponsored by the Virginia Local Government Management Association.

Peters is excited about the new role, “I am truly honored to have been selected as Vinton’s next Town Manager. It has been my pleasure to work with Town Council, staff, business owners and residents during my first five years here and I look forward to continuing those relationships in this new role.” Peters says his ties to the Vinton community make this job special, “Having grown up and attended high school in this community, I am very grateful for the opportunity to help shape the services that we provide to our citizens and help direct the future development activities throughout the town.”

Peters’ tenure with Vinton has seen many successful projects. He has played a key role in the town receiving and managing numerous state and federal grants, including overseeing a Community Development Block Grant to assist with revitalization efforts and develop business support programs for the town’s downtown business district. Other major roles include assisting with the redevelopment of numerous properties including the former Vinton Motors property at Vinyard Station, Lancelot Sports Complex, Gish Mill, Roland E. Cook Lofts, Billy Byrd Apartments, Vinton Macado’s and the recruitment of Rosie’s Gaming Emporium. Peters is also active in the community representing the Town of Vinton on numerous regional boards including the Roanoke