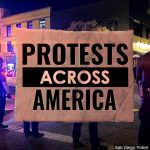 (from ABC News) An overnight protest on a closed Washington state freeway ended with two women in the hospital after a motorist barreled into the crowd, according to Washington State Patrol. For weeks, law enforcement authorities have warned pedestrian protesters not to use the highways as the setting for protests. “The freeway is simply not a safe place…We feared something like this would happen,” said Captain Ron Mead, commander of Washington State Patrol field operations for District 2, at a press conference Saturday morning.
A 27-year-old man from Seattle is accused of driving his car onto the closed I-5, going around the vehicles that were supporting the protesters, and striking the pedestrians standing in the shoulder of the road, said Mead. Interstate 5 between SR 520 and I-90 was closed multiple times in the last 24 hours due to protests. A 32-year-old woman from Bellingham and a 24-year-old woman from Seattle were hit and taken to a nearby hospital. The younger woman is in critical condition after suffering life-threatening injuries while the other victim is in stable condition. The unidentified driver stopped the all-white sedan and was taken into custody for questioning. Mead said the driver passed a sobriety test and there’s no indication that the car was stolen.