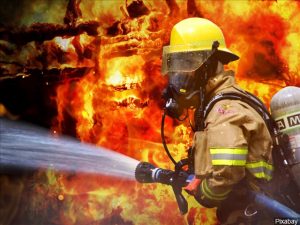 FROM Roanoke County Fire and Rescue:The fire on Hollins Road at the Ardagh plant was extinguished early this morning. All crews had cleared at 3:20 a.m. The Roanoke County Fire Marshal’s Office has concluded their investigation and found the fire to be accidental. It originated in an “inner bake oven”and traveled along the exterior roof line through the “Regenerative Thermal Oxidizer”before being extinguished. While there is extensive fire, smoke and water damage to the machines, conveyors, and exhaust systems of the building, there is no major structural damage to the building itself. One additional firefighter from the City of Roanoke Fire and EMS was injured and transported to the hospital with smoke inhalation. The previously injured firefighter from Roanoke County was treated on scene for a back injury. Damages are estimated at approximately four million dollars. We would like to thank the City of Roanoke Fire and EMS for all their help on this fire.