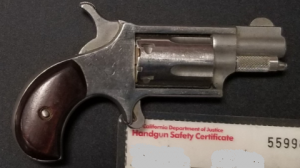 (TSA News Release) ROANOKE, Va. – Transportation Security Administration officers stopped a Salem, Virginia, man from carrying a .22 caliber handgun onto an airplane at Roanoke-Blacksburg Regional Airport on Thursday, September 3. It was loaded with five bullets. TSA officials detected the gun in the man’s carry-on bag. They immediately alerted the airport police, who responded to the checkpoint and confiscated the weapon.

Guns are prohibited in the cabins of airplanes. It is a law that has been in place long before TSA even existed,” said Chuck Burke, TSA’s Federal Security Director for the airport. “Our TSA officers are very skilled at detecting firearms and other prohibited items. I strongly urge passengers to be certain they don’t have any prohibited or illegal items in their carry-on or checked bags before arriving at the airport. It’s always a good idea to start with an empty bag when packing to make sure that you haven’t accidentally left something inside that is not permitted past a checkpoint.”