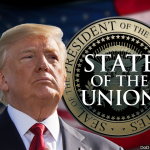 During his State of the Union Address last night President Trump criticized efforts to loosen restrictions on late term abortions in New York and Virginia. The President saved some of his ire for Virginia’s embattled Governor Ralph Northam, who made news last week for comments on a radio program that some interpreted as an endorsement of infanticide. Trump called for Congress to pass legislation outlawing late term abortions – which others support where the mother’s health is at risk or the fetus would not survive outside of the womb.