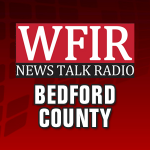 A Roanoke-area truck driver was killed Friday night when a freight train struck his rig at the Georgia Pacific plant in Big Island. State Police say 39-year-old Alberto Columbie of Daleville had parked his truck across the CSX tracks and gotten out when he heard the train coming. Officials say he tried to get back and move the semi but could not do so in time. Columbie was trapped under the rig and died at the scene.

From State Police: BEDFORD CO, Va. – Virginia State Police Senior Trooper T.C. Fairburn is investigating a motor vehicle crash which resulted in a fatality. The crash occurred Friday (Sept 14) at 7:16 p.m. on Riverside Circle, which is a private drive in Bedford County. A 2012 Freightliner tractor trailer was improperly parked on the railroad tracks on Georgia Pacific plant property when the train approached. The driver, which was not in the tractor trailer as the train approached, entered the vehicle and attempted to move truck out of the path of the approaching train. The driver then determined there was not enough time to complete the task, he then jumped from the vehicle as the train struck the passenger side; trapping the driver under the vehicle. The operator of the Freightliner was identified as Alberto Zaldivar Columbie, 39, of Daleville, Va. Mr. Columbie died at the scene. The crash remains under investigation.