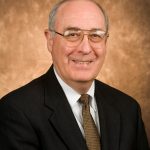 Tom McKeon today announced he will retire as executive director of the Roanoke Higher Education Center at the end of this year. McKeon has led the Center since its construction began in 1999, creating a hub for adult learning that today supports 310 jobs and an annual economic impact of $32 million per year. A total of 9,083 people have completed degree, certificate and workforce training programs at the center since it opened in 2000.

The Roanoke Higher Education Center was among the first large redevelopment projects in the city, transforming the former art deco Norfolk & Western headquarters into a center of learning offering programs from the GED to the PhD. In 2007 the Center restored and preserved the historic Henry Street buildings that became the Claude Moore Education Complex, home to Virginia Western Community College’s culinary arts program.  State Sen. John Edwards, chair of the Roanoke Higher Education Authority Board of Trustees, announced McKeon’s retirement during a board meeting today.