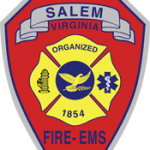 (City of Salem release) The Salem Fire & EMS Department responded to a commercial structure fire at Yokohama Tire, located at 1500 Indiana Street, Sunday night at approximately 6:59 p.m. All employees were able to evacuate safely, and no one was injured, because of the fire. The first units arrived within five minutes of receiving the call and found heavy smoke coming from the building. The fire was discovered in the facility’s exhaust system ductwork, and it took firefighters just under two hours to bring itunder control. The fire was isolated to that ductwork area and no other areas of the building sustained any related fire or smoke damage. Approximately 27 personnel from the Salem Fire & EMS Department (Truck 1, Engine 2, Engine 3, Medic 801, Medic 802, Battalion 1 & Fire Medic 1) and the Roanoke Fire& EMS Department (Engine 4, Engine 13, Ladder 5 & Battalion 2) responded to the call. The Roanoke County Fire & Rescue Department (Wagon 1 & Medic 92) covered additional calls, while units were occupied. The fire was ruled accidental by the Salem Fire Marshal’s Office, caused by a seized bearing in the exhaust system. The damage to the facility is estimated at $160,000