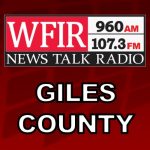 (VSP release) Virginia State Police Trooper S.T. Golden is investigating a single-vehicle crash in Giles County crash. The crash occurred on Jan. 15,at 10:15 a.m. on Route 460, a short distance from Route 758.
A 1990 Chevrolet S10 pickup truck was traveling west on Route 460 when it ran off the left side of the highway, went through the median and crossed the eastbound lanes. The vehicle continued off the road and overturned.
The driver, James E. Sanders, 64, of Pembroke, Va., was transported to Carilion Giles Community Hospital in Pearisburg where he succumbed to his injuries later that morning. He was not wearing a seatbelt.  The crash remains under investigation.