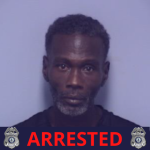 (from Roanoke PD) On June 30 at approximately 10:30 p.m., Roanoke Police were notified by the City of Roanoke E-911 Center of a person with a gunshot wound in the 4500 block of Melrose Avenue NW. Responding officers located an adult male victim inside a business with what appeared to be a serious gunshot wound. Roanoke Fire-EMS transported the man to Carilion Roanoke Memorial Hospital for treatment. Throughout the course of the investigation, Officers were able to determine the suspect in the shooting was Sterling D. Whitfield, Sr., 51 of Roanoke. Preliminary investigation indicates a verbal altercation between the two men escalated to the shooting. Whitfield, Sr. fled the scene in a vehicle before officers arrived. Officers immediately began looking for Whitfield, Sr.

A short time later, Officers observed the suspect’s vehicle driving in the area near the scene. Officers were able to positively identify the driver as the offender in the shooting, Whitfield, Sr. Officers initiated a traffic stop, attempting to pull over the vehicle. Whitfield, Sr. did not comply with the traffic stop and began accelerating. Officers engaged in a vehicle pursuit, which ultimately led to Country Club Drive NW. The suspect’s vehicle crashed at that time, and the suspect left the vehicle and attempted to flee the scene on foot. After a brief foot pursuit, Officers took Whitfield, Sr. into custody without further incident. Sterling D. Whitfield, Sr. was arrested and charged with malicious wounding, brandishing, abduction, hit-and-run and felony eluding. He in currently in custody at the Roanoke City Jail. This remains an ongoing investigation and further details are not available at this time.