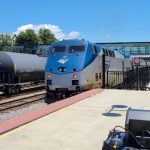 Five years after passenger rail service rolled back into Roanoke for the first time in decades a second Amtrak daily train was welcomed back around 1pm today by dignitaries, after originating in Washington DC. Roanoke Mayor Sherman Lea was there to note the occasion – and the city’s long history as a railroad hub. More than 210,000 passengers have traveled to and from the Star City on Amtrak since April 2017. State transportation officials, the Amtrak CEO and local elected officials were on hand to greet passengers as they stepped off the train. The second Roanoke-to-DC train will depart at 4:30pm daily.