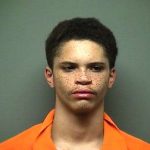 Salem police have made an arrest in a December 26 shooting on Cliff View Drive that sent two men to local hospitals with non-life threatening inujries. 19 year old Zachary Jennings of Roanoke, who was not injured during the early morning incident, has been charged with shooting into an occupied residence. Jennings is being held in the Roanoke County-Salem Jail.