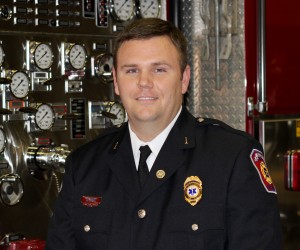 Salem Fire and EMS Chief, John Prillaman, announced yesterday that Captain Matt Rickman has been named the department’s new deputy chief. Prillaman left the deputy chief position on January 1 when he replaced Chief Pat Counts, who retired. Rickman joined the Salem Fire Department in the summer of 2005. He was named a paramedic and senior firefighter in 2008 and in November of 2011, he became captain and named the city’s EMS coordinator. Rickman is a Botetourt County native who lives in Bonsack with his wife and their daughter.