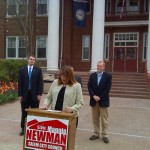 For the first time in 20 years a City Council candidate will run as a Republican in Salem. Maggie Newman received an endorsement today from two prominent GOP politicians – state Senator Ralph Smith and Congressman Morgan Griffith. She wants to see City Council stop giving away a million dollars a year to non-profits, and Newman would also like for Salem’s municipal elections to be moved to November. She spoke with WFIR’s Gene Marrano about that: