After a 14 hour manhunt that began Wednesday night in West Virginia, authorities have captured a man wanted for holding up a Roanoke bank this week. Police say Richard Henry Ames, III, 23, walked into SunTrust bank on Williamson Road around noon on Tuesday, demanded money and took off.  He had been last seen in the Rupert area of Greenbrier County, West Virginia. Sheriff’s deputies there pursued Ames on foot for more than 30 minutes Wednesday night, but he got away from them. Numerous local, state and federal agencies combed nearby areas for Ames. They captured him around 1:00 p.m. Thursday on an access road to a strip mine. Roanoke Police say he is charged with robbery and a probation violation. 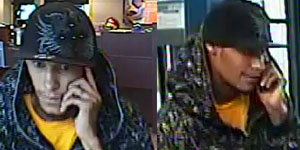