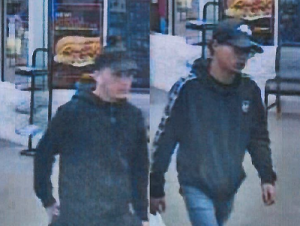 News release: The Town of Bedford Police Department is investigating a fraud that occurred on November 18, 2018 at approximately 3 A.M. Investigators are asking for the community’s assistance in identify two male suspects who altered bar codes on five (5) Samsung cell phones prior to purchasing them with gift cards. The gift cards used to purchase the phones were previously purchased at a separate location with a stolen debit card. After the suspects successfully purchased the cell phones at altered prices, they purchased several more gift cards using a stolen debit card. The total loss including cell phones and gift cards is $2,800. Anyone with information in reference to this Fraud or the identity of the suspects involved is asked to contact Inv. M. Alderson with the Town of Bedford Police Department.