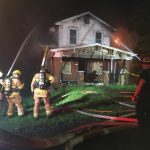 Updated news release: The Roanoke County Fire Marshal’s Office has ruled that the structure fire on Crescent Boulevard is a total loss, however the cause and exact damage amount is still undetermined at this time.

Previous: (Roanoke County, VA—September 22, 2018) Roanoke County Fire and Rescue responded at about 2:00 a.m., on Saturday, September 22, 2018 to the 5000 block of Crescent Boulevard for the report of a residential structure fire. First arriving crews did find smoke and flames showing from the second story of a two story house. The house is vacant and has been abandoned for approximately 5 years. The house did sustain significant damage due to the fire. There were no injuries. Crews from Clearbook, Cave Spring, Back Creek, Vinton and Fort Lewis responded to the fire. The fire was marked under control in about one hour. The Roanoke County Fire Marshal’s Office is on scene to investigate a cause. There is no estimate on damages at this time.