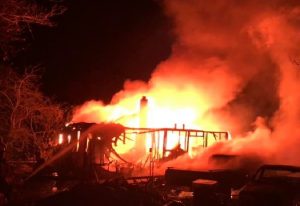 Roanoke County fire officials say they are not yet able to determine what caused an overnight fire that destroyed a home in the Masons Cove area. The resident remains hospitalized for smoke inhalation. Damage to the home on Green Acres Drive is estimated at $108,000.

UPDATED NEWS RELEASE: The Roanoke County Fire Marshal’s Office has concluded that the cause of the fire which occurred in the 4700 block of Green Acres Drive is undetermined. The structure is a total loss with an estimated value of $108,000.00  The occupant of the home is still hospitalized. The American Red Cross will be assisting the occupant of the home. The occupant’s family is caring for the dogs.

PREVIOUS: Roanoke County Fire and Rescue responded at about 4:00a.m., on Monday, November 16, 2020 to the 4700 block of Green Acres Drive, which is located in the Masons Cove area, for the report of a residential structure fire. First arriving crews found heavy fire and smoke showing from all sides of a one story, wood frame structure. The one occupant of the home evacuated safely and went to Roanoke County Public Safety Building #10 on Bradshaw Road to report the fire. He was then transported to a local hospital with serious injuries from smoke inhalation. Four dogs also evacuated the structure and are safe. The house will be a total loss. The Roanoke County Fire Marshal’s Office is on scene to investigate a cause.###