UPDATE: One person displaced after accidental fire in Roanoke County 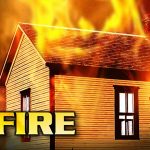 UPDATE – The Roanoke County Fire Marshal’s office says in a release that their investigation has found this fire to be accidental due to combustible material too close to a wood stove.  The damages are estimated at $30,000.
Original post – From Roanoke County Fire and Rescue: Roanoke County Fire and Rescue responded at about 10:00 p.m., on Tuesday, January 15, 2019 to the 6900 block of Thirlane Road in the Hollins area for the report of a residential structure fire.First arriving crews did not find any evidence of fire from the exterior of the house, but did encounter smoke and flames once inside the home.Crews from Hollins,North County, Masons Cove, Fort Lewis and several units from the City of Roanoke responded to the fire. The home was occupied by one adult who made it out safely.There were no injuries.The occupant will be displaced and will be staying with family in the area. The fire was brought under control in approximately 10 minutes.The Roanoke County Fire Marshal’s Office is on scene to investigate a cause.There is no estimate on damages at this time.