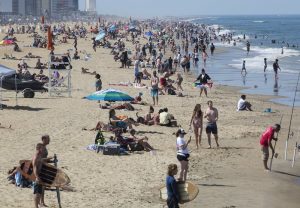 Governor Northam said today those thinking about heading to the beach this Memorial Day weekend can do it in the Commonwealth – Virginia Beach and First Landing State Park beaches will both be open for swimming and sunbathing, with parking lots set at 50% capacity. No group sports or large gatherings will be allowed.

Northam said he is counting on Virginians to “be responsible” over the holiday weekend if they want to see the ocean beaches remain open.

Northam’s decision follows a weekend at Virginia Beach when many people decided on their own to reopen the beachfront. (See photo at left.) Here is the story from Associated Press:

VIRGINIA BEACH, Va. (AP) — Warm weather drew crowds to the Virginia Beach oceanfront even though the beach is considered closed under the state’s stay-at-home directives.

Families ordered snow cones, bought hermit crabs and cramped gift shops while bikers pedaled on the boardwalk on Saturday, the Virginian-Pilot reported. Tents, umbrellas and beach blankets were set up near the water.

Under Gov. Ralph Northam’s first phase of a gradual reopening plan, retail stores are reopening with limited capacity, but indoor gyms remain closed, beaches are still off-limits and restaurants cannot provide indoor dine-in service. No restrictions have been lifted in northern Virginia, Richmond and Accomack County, which were granted two-week delays after local officials said it was too early to move forward.

“There’s a lot of that going on,” Conner Garrison said. He and Taylor Tripp, of North Carolina, just across the Suffolk border, purchased snow cones on the boardwalk. “I figured there would be nobody here,” Tripp said.

The newspaper reported the beach was not jammed and groups maintained their distance. Many people on the boardwalk wore masks.

Kayla Thomas and a co-worker had masks and gloves on while they served scones at an oceanfront concession stand. Thomas said the crowds looked like those she might see at the beginning of summer.

“I’m just shocked by the amount of people,” Thomas said.

Northam earlier this week said he based his decision to reopen on positive trends in key metrics related to the virus’s spread, like hospital readiness and testing capacity. He stressed repeatedly that the process will be slow.

Beauty parlors and barber shops will be by appointment and will be able to operate only if both employees and customers wear masks. Entertainment venues, like theme parks and bowling alleys, will stay closed.