Published January 4, 2019 | By Gene Marrano
Changes to several Valley Metro bus routes in Vinton – numbers 35 and 36 – are coming on January 10th. Its the result of a two-year study that involved several agencies and public feedback. The changes eliminate some stops with low ridership and adds others that Vinton officials also say will help residents get to and from their jobs. Check the Valley Metro website for all of the changes. 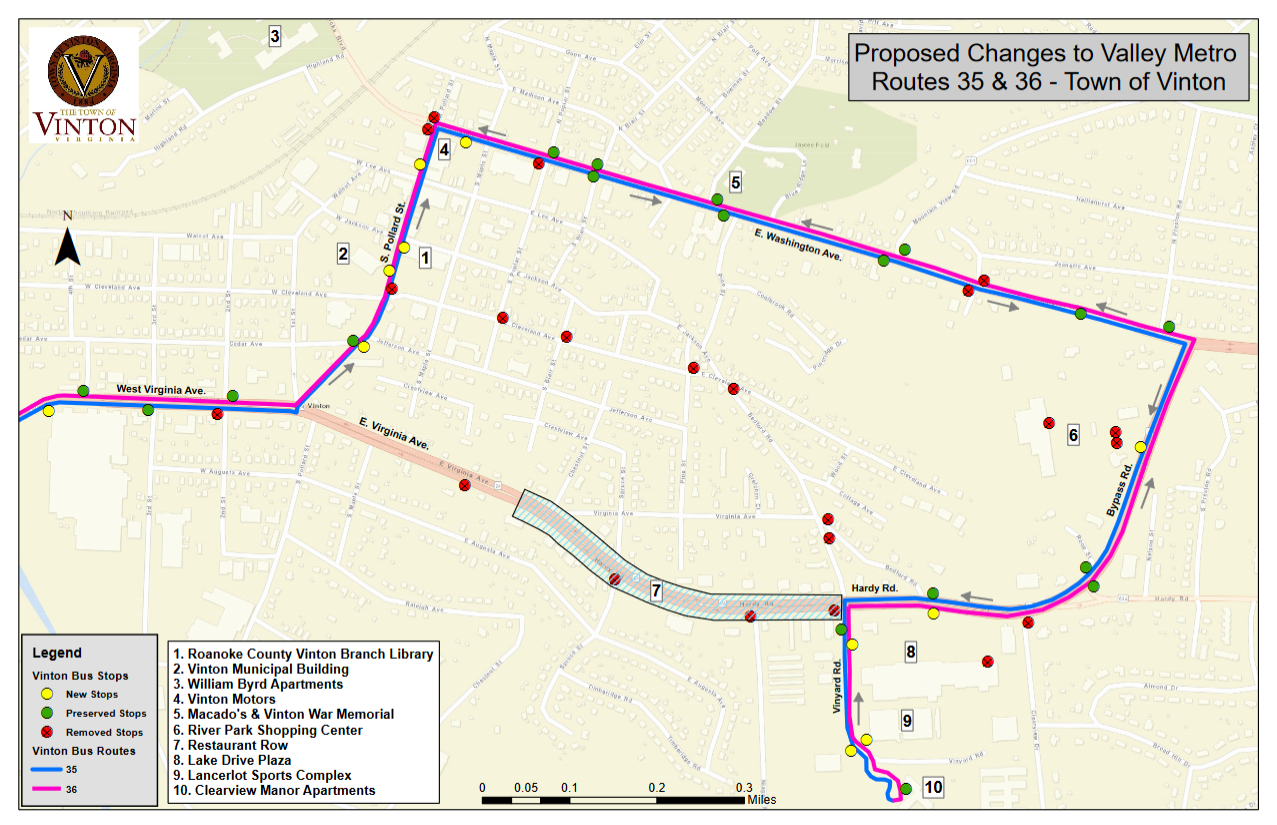 From the Town of Vinton: With the new bus routes, buses will travel east on West Virginia Avenue from the City of Roanoke to the Town of Vinton, turn left onto Pollard Street with stops at the Carilion Clinic Family Medicine and the Roanoke County Vinton Branch Library. The route will then make a right turn onto Washington Avenue and stop at the former Vinton Motors Building (future site of the Vinyard Station mixed-use development project). Most existing stops have been preserved along the rest of Washington Avenue. The route then turns right onto Bypass Road with a single bus stop fronting the River Park Shopping Center, as buses will no longer enter this property.
The Valley Metro buses will then turn right onto Hardy Road, then make a left turn onto Vinyard Road to the Clearview Manor Apartments. New bus stops are being installed on both sides of Vinyard Road to accommodate for the higher traffic flow to the Lake Drive Plaza Shopping Center  , the Lancerlot Sports  Complex, and the future site of Rosie’s Gaming Emporium.  Along the inbound route returning along the same route in a reciprocal manner, two stops will be located fronting Lake Drive Plaza with one near the Shoe Show and the other near the Kroger Fuel station.  The buses then continue on Bypass Road, Washington Avenue, and Pollard Street where it will stop in front of the Post Office building and the Vinton Municipal building before returning to Campbell Station via West Virginia Avenue. The new routes will go into effect Thursday morning, January 10, 2019.