UPDATE: Roanoke County Police say they found a Farmville man on Fort Lewis Mountain three days after he went missing. A car belonging to 70 year old William Hairston Senior was found near Glenvar Friday afternoon. His family had said he suffers from memory problems. A Roanoke County officer found Hairston in a wooded area shortly after 5:00 p.m. Friday. He was taken to the hospital to be checked out. There’s no word on his condition.

Roanoke County Police say there is reason to believe a man missing three days from Farmville may be in the Glenvar area. A car belonging to 70-year-old William Hairston Senior was found near Glenvar this afternoon, and a man fitting his description was seen in the same area earlier this week. According to family members, Hairston suffers from memory loss and gets confused easily. Roanoke County police are asking people to call 911 immediately if they see anyone fitting Hairston’s description. 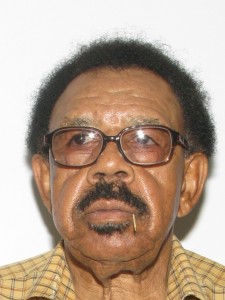 Roanoke County Police are asking for the public’s help with a missing person case. They are searching for 70-year-old William Hairston, Sr. of Farmville, VA.

According to family, Hairston suffers from memory loss and gets confused easily. He’s been missing from the Farmville area since Tuesday, Dec 4. His family called Farmville police after Hairston failed to return home from the pharmacy. He was traveling alone and was last seen wearing a black coat and khaki colored pants. Hairston is a black male and is five-foot-eleven and weighs 240-pounds.

This afternoon (Friday, Dec 7), Roanoke County police received a call about a parked car on a private road near Dow Hollow Road in the Glenvar area of Roanoke County. The car – a 1993 maroon Pontiac – is Hairston’s vehicle. Hairston wears eyeglasses, which were found on the ground in the vicinity of the car.

Roanoke County police believe Hairston has been in the Glenvar area since Wednesday. Since finding his car, they have learned that a man fitting Hairston’s description was spotted by a property owner on Wednesday. A caller also phoned Roanoke County’s 911 Communications Center last night to report a suspicious person walking in the same area in which his vehicle was located.

Roanoke County police are asking people to call 911 immediately if they see anyone fitting Hairston’s description.