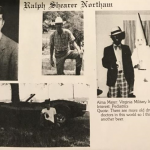 NORFOLK, Va. (AP) _ Virginia Gov. Ralph Northam’s medical school has won a national award for fostering diversity as it weathers the scandal ignited by a racist photograph from its 1984 yearbook. The Virginian-Pilot reports the National Association of Diversity Officers in Higher Education picked Eastern Virginia Medical School for its Institutional Excellence Award this year. School president Richard V. Homan says he learned of the award a few weeks ago, “after the chaos,” but couldn’t announce it because of the association’s rules. Homan picked up the award Friday at a conference in Philadelphia. He initiated two external investigations after a photograph from Northam’s yearbook page showing two people in racist costumes surfaced. The medical school discontinued yearbooks after learning of Confederate gear in yearbooks as recent as 2013.