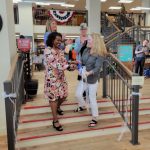 Its opening was delayed by a few months in 2020, but then Mast General Store on South Jefferson Street opened and soldiered on through the pandemic. At a celebration of its one year anniversary in Roanoke this morning, Vice-Mayor Trish White-Boyd said she is bullish about the future. Company president Lisa Cooper also spoke at the first-year anniversary event. White-Boyd commended the North Carolina-based retailer for donating a portion of its sales to non-profits in the Roanoke Valley.