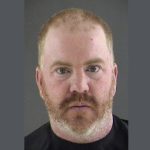 Bedford County investigators say they have cracked the case of five stolen calves. The sheriff’s office says they were taken last month from the Spring Lake stockyard in Moneta. It wasn’t long before deputies traced the stolen cattle to North Carolina, where they say Eric Bullins admitted taking them. Bullins was returned to Bedford County today. He is charged with grand larceny and is free on bail.

On Monday September 16, 2019, Eric Bullins returned to Bedford County and was arrested and charged for the grand larceny of the calves. Bullins was released on a $2000.00 bond.