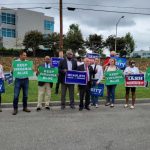 Today marked the start of early voting before the November 2 General Election. Local Democratic elected officials including 12th District Delegate Chris Hurst rallied this morning outside the Roanoke City registrar’s office.  Hurst said laws enacted by the Democrat-controlled General Assembly over the past few years have made early voting and the use of absentee ballots more accessible to Virginians.