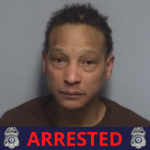 On January 11 at approximately 10:40 p.m., Roanoke Police were notified by the City of Roanoke E-911 Center of a person with a gunshot wound in the 2300 block of Delaware Avenue NW. Responding officers located an unresponsive adult male with what appeared to be a critical gunshot wound inside a residence. Roanoke Fire-EMS pronounced the man deceased on scene. His identity will be shared after next-of-kin is properly notified.

While on scene, officers located an adult male matching the description of the suspect. Officers arrested the man and took him into custody after a brief physical altercation. The suspect was transported to the Roanoke Police Department to speak with Detectives.

Marcus D. Williamson, 51 of Roanoke, is charged with Second Degree Murder regarding this offense. No further details can be shared at this time and this remains an ongoing homicide investigation.