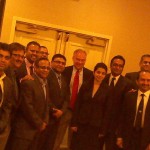 U.S. Senator Tim Kaine was in Roanoke this morning, meeting with a group of Asian-American business owners … Kaine noted that the population among those of Asian decent is now growing in this part of the state after being concentrated in Northern Virginia … as a Senator he’s met with business associations before but never in Roanoke he said today. The local Asian-American Business Owners Association in Roanoke has about 300 members; mostly of Indian descent; many operate small businesses or are entreprenuers. WFIR’s Gene Marrano was there to speak with Sen. Kaine: