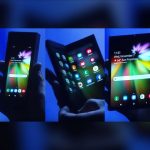 The release of phones with folding screens — like yesterday’s unveiling of the Samsung Fold — is considered by some to be the next step in the evolution of smart phones. It may too expensive for many people to consider one now, but a local IT expert believes it will become cheaper and very common in the future. WFIR’s Ian Price has the story: