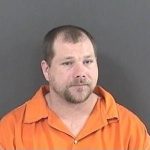 A Roanoke County inmate who walked away from an outside work detail late this morning on Hollins Road was apprehended without incident about two hours later just inside the Roanoke City limits. Local residents had been asked to shelter in place. 34 year old David McFall is serving time for armed robbery. Three Roanoke County Fire and Rescue drones helped conducted the search.

ROANOKE COUNTY NEWS RELEASE: At approximately 11:30 this morning an inmate walked off the Sheriffs Office inmate work crew which was working in the 5200 block of Hollins Road. Residents in the area were asked to shelter in place. His name is David Adam McFall, 34 years old. He is currently serving time for armed robbery. He was not armed at the time of his escape or when he was apprehended. He was taken into custody at 1:45 near the intersection of Pennsylvania and Elmcrest Drive, just inside the Roanoke city limits. Roanoke county police, Roanoke city police and the Roanoke county sheriff’s office conducted the search. The Roanoke County Fire and Rescue department also deployed three drones to assist in the search.