Long-term closure expected on US 220 after fuel truck crashes, burns 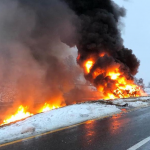 A long-term northbound closure is expected on US 220 near Fincastle after a truck carrying 8,000 gallons of gasoline and diesel fuel wrecked and flipped onto the median before catching on fire. It’s expected to take a while because a culvert under all four lanes melted. WFIR’s Ian Price has more:

From Virginia State Police: At 6:19 a.m. Route 220 just north of Fincastle was closed due to a tractor trailer crash. The truck was haul approximately 8000 gallons of gasoline and diesel fuel traveling north on Route 220 toward Clifton Forge. According to driver of the tractor trailer, James Willard Yarbrough, Jr., of Stuart, Va. swerved to avoid striking a deer. The truck ran off the left side of the roadway, into the median and overturned. The driver was able to exit the truck before the vehicle caught fire. The fire caused extensive damage to the north side off the roadway and the culvert running under the northbound travel lanes. North and the southbound sides of the roadway currently closed at this time until the total damage can be assessed. VDOT believes once the truck is removed they will be able open the southbound side which will handle both north and southbound traffic. This will take several hours to prepare. VDOT is detouring traffic off of Route 220 around the incident at this time. The driver was charged with Reckless Driving.