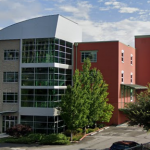 That downtown property along I-581 known as the Elmwood Building has been purchased by Freedom First Credit Union, which will use the former furniture store and the one-time home for Meridium as its headquarters. Freedom First will move employees there over time; GE Digital will be a tenant for now. The century-old building has been renovated in recent years.

(Press release) Freedom First has purchased the Elmwood Building located at 207 Bullitt Ave SE in Roanoke’s downtown historic district to serve as its future corporate headquarters. “Our continued growth has made it possible to purchase this terrific property where we will one day consolidate many of our business units into one location,” said President and CEO Paul Phillips about the purchase. “One of our focus areas is providing loan capital to commercial developers who transform old buildings into community assets. So, it seems only fitting that our headquarters would be located in just such a building, with its timber framing, exposed brick, original floors and a blend of modern amenities, it’s a truly beautiful building that our team members will enjoy.”
Built in 1919, the Elmwood Building has been used by a hardware store, furniture warehouse, Meridium, Inc., and most recently GE Digital. Consisting of four floors and approximately 46,500 square feet, the building will continue to house GE Digital on three floors with Freedom First’s administrative offices occupying the fourth floor. As more space becomes available in the building, Freedom First will move employees into those areas.