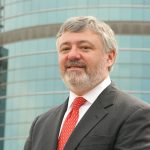 (A statement from Nancy Howell Agee, President and CEO of Carilion Clinic, and Cynda A. Johnson, President and Founding Dean, Virginia Tech Carilion School of Medicine). Sadly, we share the news of the passing of Dr. Edward G. Murphy, former president and chief executive officer of Carilion Clinic. He passed away surrounded by family on Sunday, Oct. 15, 2017, following a valiant battle with cancer. Dr. Murphy spent 13 years at Carilion and presided over some of the more dynamic moments in our organization’s history – our transition from a system of hospitals to a physician-led clinic and creation of the Virginia Tech Carilion School of Medicine and Research Institute. He joined Carilion in 1998 as executive vice president and chief operating officer and was named president and chief executive officer in 2001. Dr. Murphy will be missed by the many who worked with him, and his imprint on our community will be felt for generations to come.