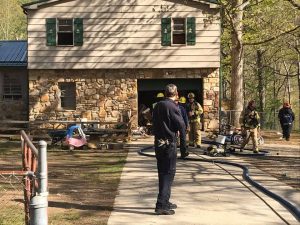 UPDATE: The fire that occurred on Bradshaw Road caused approximately $10,000.00 in damage. The fire was accidental in nature with the cause being a mechanical/electrical failure or malfunction within the clothes dryer which was in the basement/laundry room. The American Red Cross is now assisting the family.

NEWS RELEASE: Roanoke County Fire and Rescue responded at about 8:50 a.m., on Monday, April 27, 2020 to the 4300 block of Bradshaw Road , which is located in the Masons Cove area, for the report of a structure fire. First arriving crews from Station 10 (Masons Cove) found light smoke showing from the garage area of a split-level home. The fire was brought under control in about 15 minutes . There were no injuries . The home was occupied by two adults and five children all of whom managed to escape safely. They will be displaced and will be staying with family in the area. The Roanoke County Fire Marshal’s Office is on scene to investigate and to estimate the damages.