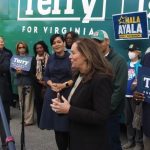 The Democratic Party of Virginia brought its “Get Out the Vote” bus tour to Washington Park in northwest Roanoke this morning, where former Virginia First Lady Dorothy McAuliffe – pinch hitting for husband Terry, who is running again for Governor – extolled the virtues of early voting. Also on the GOTV tour bus was the Democratic candidate for Lt. Governor, delegate Hala Ayala. Their next stop this afternoon was in Harrisonburg. Terry McAuliffe will be in Roanoke tomorrow morning at 9;45 at Sweet Donkey Coffee.