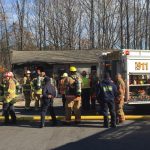 UPDATE from Roanoke County Fire and Rescue: The Roanoke County Fire Marshal’s Office has ruled the fire on Horn Circle to be accidental due to a halogen work light that was too close to combustibles. Estimated damages are $175,000. It is now believed that the 3 missing cats did make it out of the house.

PREVIOUS: A family dog died – and three cats are missing – after a morning house fire in the Vinton area. Firefighters were called to the 2100 block of Horn Circle near the Blue Ridge Parkway, and arriving crews found heavy fire and smoke coming from the front of the house. One person was home at the time and got out safely. There is no damage estimate yet, but fire officials say it is extensive. The cause is not yet determined.

News release: Roanoke County Fire and Rescue responded at 10:40 a.m., on Thursday, November 29, 2018 to the 2100 block of Horn Circle, in the Vinton area, for the report of a residential structure fire. First arriving crews from Vinton found heavy fire and smoke coming from the front window of a split level home with vinyl siding. The home is occupied by a family of two adults. One of the adults was at home at the time of the fire and was able to rescue one dog. However another dog has died in the fire and 3 cats are missing. There are no injuries to people. The fire was brought under control in approximately 15 minutes by units from Vinton, Mount Pleasant, Clearbrook, and North County. The Roanoke County Fire Marshal’s Office is on scene to investigate a cause. There is no estimate on damages at this time. However, there is significant fire, smoke, and water damage throughout the house. The American Red Cross will be assisting this family.