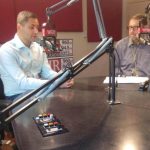 Governor Northam has released what he calls a “Bold Criminal Justice Reform Agenda” ahead of the General Assembly session that convenes next week. It includes marijuana decriminalization, parole reform and raising felony larceny thresholds. Fellow Democrat and Roanoke delegate Sam Rasoul on part of that reform agenda:

Rasoul was live in studio this morning speaking on a variety of issues – including gun control, minimum wage hikes and the biennial budget. Hear the complete conversation below, watch it on Facebook. Republican delegate Chris Head joins us Monday morning at 8:45.