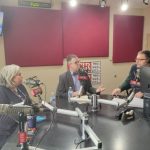 Two members of  Roanoke’s Gun Violence Prevention Commission joined us live in-studio this morning to talk about a recent community assessment that details how gangs have impacted people’s lives in some Roanoke neighborhoods. Here is that complete conversation with Roanoke City Councilman Joe Cobb, who chairs the Commission, and Stacey Sheppard, also a member of the commission.

Summary of results from survey:

• On feelings of safety and gang activity respondents from youth serving agencies are in agreement with community residents and leaders.
• As for the way, many from youth agencies emphasize a lack of activities for youth and as one respondent said, “Lack of options for building a sense of belonging outside of school”. Others insist that the level of activity hasn’t changed but that it is now being more widely reported. They also mention generational poverty, generalized gun violence, and lack of stable family/home life. Overall, in comparison to community residents and leaders, their solutions revolve less around the criminal justice system and more social welfare, therapy, and youth programs.

V. Youth Serving Agencies and Community Questionnaires and Interviews
• Respondents feel that the strengths of Roanoke lie in its championing of diversity, “small town” community feel and the breadth of resources available to the community as well as in the collaboration of the different agencies that provide them.
• Respondents identified a wide range of community issues including gun violence, generalized youth violence, gang violence, domestic violence, drug use/addiction, lack of mental health resources, poverty, lack of resources, lack of youth opportunities, homelessness/affordable housing, community fear/mistrust, legal cynicism, and institutionalized racism.
• Respondents were consistent that violence was impacting residents’ quality of life but many also elaborated that it was concentrated in the NW and SE quadrants of the city and also intersected with racial segregation. The trauma caused by increasing violence is engendering the communities with fear and mistrust.
• For the causes of violence respondents pointed toward poverty and racial injustice, both from lack of opportunity to provide for oneself and family as well as an outlet for built up frustration. Many mentioned that youth violence was not necessarily gang related but interpersonal violence springing from miscommunication and conflict. In both cases youth feel they do not have alternatives to violence and means of building healthy relationships. Drug addiction and trafficking are also sources of conflict that turn to violence as a solution.
• Respondents point to young, poor, black/African American boys as the primary victims, as well as low-income youth in general. The homeless, elderly, and drug addicted also become easy targets for violence.
• Aside from violence, affordable housing and lack of transportation were identified as primary concerns for Roanoke.
• Underlying causes of these problems mentioned were systemic racism, mistrust/legal cynicism, and lack of youth opportunities
• In terms of solutions for criminal justice, while there were calls for more accountability and criminal punishment there were also many calls for system reform to be more preventative and take a less carceral approach, embracing diversity, and building back community trust.