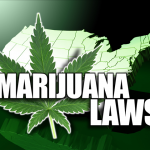 A coalition of groups statewide that include drug abuse prevention advocates and law enforcement agencies spoke out this morning on a Zoom conference – opposing any attempt to legalize marijuana for recreational use in the General Assembly.  Some participants  warned about increased traffic deaths in other states that have legalized marijuana, and spoke about adverse medical and mental health effects, especially in teens and young adults. John Jones represents the Virginia Sheriff’s Association: