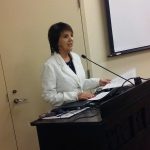 Former Roanoke County supervisor Charlotte Moore made it official today – she intends to seek the Democratic nomination and run for the 6th District Congressional seat being vacated by Republican Bob Goodlatte this year. Moore said her stint on the Virginia Association of Counties board is also a plus. Moore says she is working on collecting the 1000 signatures needed by March 12 to appear on a primary ballot in June. Sergio Coppola and Peter Volosin are the other two announced Democratic hopefuls so far.