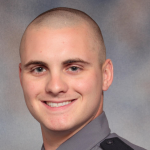 News release: The Cannonball Memorial Run will be stopping by the Virginia State Police Wytheville Division HQ on Sunday, April 14, at 3:30 p.m. to make a formal presentation to Trooper Lucas B. Dowell’s parents and VSP colleagues. Trooper Dowell, 28, was shot and killed in the line of duty Feb. 4, 2019, while assisting with the execution of a search warrant in Cumberland County. He was a Chilhowie, Va. native and was a member of the Appomattox Division Tactical Team (equivalent of a police SWAT Team). Trooper Dowell was assigned for patrol to the Appomattox Division’s Area 20 Office, which encompasses Lynchburg and the counties of Amherst and Campbell.

SAN BERNARDINO – A crew of 12 officers will travel more than 3,000 miles in a “cannonball-style” drive from Redondo Beach, CA to Washington D.C. The crew will stop at each agency where an officer was murdered in 2018 to honor their service and ensure the officer, or the needs of the surviving families, will not be forgotten.

The crippling grief of losing an officer in the line of duty is worsened by the immediate need for resources, which are too often very scarce at smaller police agencies across the nation. This sad fact was the basis of the formation of the Cannonball Memorial Run, which was started by San Bernardino County Sheriff’s Department Sergeants John Bannes and Jason Hendrix.

“These fallen officers are our family, Bannes said. They went to work one day with every intention to help people and keep their neighborhoods safe but instead they were murdered. We owe them gratitude for their sacrifice but we also owe their families an immediate support system to help them when they need it most.”

Bannes and Hendrix were deeply impacted by the blatant ambushes on police in 2016. They decided to jump in a car, with their friend, Sheriff’s Sgt. Mike Rude, and drive to each agency where the officers had been murdered to show support and camaraderie. As they traveled to some of the smaller departments and saw surviving families without ample support, Bannes and Hendrix vowed to make a difference.