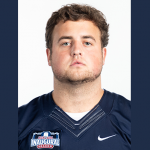 From Roanoke County Police: On Sunday, March 10, at approximately 1:30 a.m., a Roanoke County police officer observed a vehicle parked in front of Cave Spring High School, near the construction fence. There was a gap in between the fence so they conducted a security check of the construction site of the school. Two subjects, Zachary Foutz (Roanoke, Va) and Beau Carter (Kents Store, Va), both 22 years old, were located inside the school area. They were charged with:

Carter – Burglary and Obstruction of Justice
Police are investigating a report of fireworks being set off inside the school. There’s nothing further to provide on that at this time.  I’ll also add that safety is a huge concern for the Police Department as well as with the School System. Not only is it illegal to be inside this construction site, but more importantly, it’s extremely dangerous and they don’t want anyone to be injured or killed.