UPDATE: Man in Botetourt County standoff has been arrested 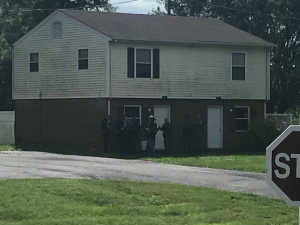 UPDATE: State Police say a man who barricaded himself inside a strangers Botetourt County apartment for about 11 hours has been arrested. Officials say 39-year-old Chad Ira Montgomery, of Covington, was taken into custody after police used tear gas to get him outside of a duplex in the 100-block of Westview Road in Troutville. State Police say it started after Montgomery fled an attempted traffic stop on I-81 south shortly after 10 am yesterday. Officials say he crossed the median and began heading north before crashing and taking off on foot from the Interstate. No word on the exact charges Montgomery faces, but officials did say they have several felony warrants in hand.

UPDATE: State Police say the suspect has fired at them “multiple times” from the apartment, but officers have not returned fire. Officials say they have attempted various non-lethal means to secure his surrender.

FROM STATE POLICE: State police and the sheriff’s office have made repeated attempts to negotiate with the suspect to surrender. During the course of the afternoon, the suspect has fired multiple times at state police inside the residence. State police did return fire and have attempted various non-lethal methods to secure his surrender.

PREVIOUS: State Police say a man who fled an attempted traffic stop on I-81 remains barricaded inside an apartment north of Roanoke in Troutville. Officials say he crossed the median before taking off on foot from the Interstate. At last word, negotiators were attempting to talk him out of the residence. State Police say no one was home at the time, and there is no danger to the public.

State Police news release: State Police attempted to stop a vehicle traveling south on Interstate 81 at the 155 mile marker. When the trooper activated his lights the vehicle fled. The traffic pursuit traveled south on Interstate 81 when the driver crossed the median at the 152 mile marker to the north side of the Interstate and continued to flee. The vehicle crashed shortly after entering the northbound side of the Interstate, at which time he fled east on foot toward Troutville. Botetourt County and State Police units located the subject on Sunset Drive in Troutville, where he has barricaded himself in an apartment. At this time State Police negotiators are attempting to talk him to of the residence. There is no danger to the public at this time, as the subject is contained and the residence was unoccupied when the suspect gained access.