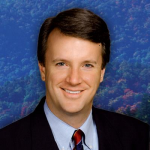 Delegate Ben Cline has won the Republican nomination for the Sixth District at the GOP convention in Harrisonburg..”I am very excited to finally have a nominee in the Sixth,” said RPV Chairman John Whitbeck. “I have the utmost confidence in Cline’s ability to run a successful campaign and keep the Sixth District Republican. He has a top-of-the-line grassroots operation that will ensure his victory in November. Cline has one of the most impressive campaigns of any Republican in the United States.”

Cline has served the 24th District in Virginia House of Delegates for 16 years and previously Chief of Staff for retiring Congressman Bob Goodlatte, according to a release from the Republican Party of Virginia. He will face off in November against the winner of the Democratic primary on June 12th, when four contenders will seek their party’s nomination in a district that is historically “red.” (with reports from WDBJ-7)